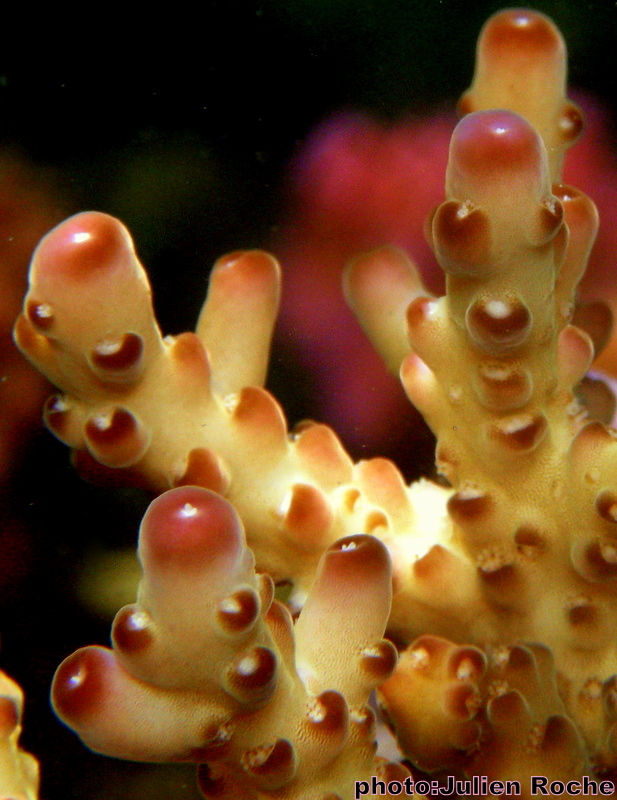 People not very familiar with the subject often ask us if coral is a plant or an animal. Although coral grows stationary in the ocean rock and looks more like a plant, it is actually an animal. A number of single animals that form a coral to be more precise. The single organisms live together for protection to form a colony that appears what we perceive as a coral in its typical mini tree form. Coral Polyps are shaped lite little cylinders with a mouth and tentacles on one end. The tentacles help trap food and sting animals that could be a danger to the coral. The way coral get their color is mostly through algae that is growing in the soft tissue of the coral. The algae helps to absorb waste and create nutrients for the polyp. Since the algae in the coral uses photosynthesis to transform sunlight, the coral appears in a way even more like a plant. With this photosynthesis process the algae creates oxygen and carbohydrates which the coral uses together with ions from the water to build a limestone exoskeleton. Over time the limestone from million of years of coral growth can accumulate to build islands. Coral reefs are highly complex ecosystems with a large number of symbiotic relationships of its inhabitants. Coral reefs are the breeding grounds for about a third of all life in the sea. The survival of this habitat is crucial to survival of many species of sea creatures. Coral multiplies by releasing larvae into the current. That larvae becomes part of the free floating plankton that carried by the ocean currents to other places where it can take hold and form and populate new reefs.

Pollution, fishing, and a rise of sea temperatures along with a rise of sea levels are all factors that threaten the fragile balance of the coral reef ecosystem. About a third of all reefs are seriously damaged and experience coral bleaching. This is a process where a coral under distress expels the symbiotic algae it normally hosts. The coral appears white and is not able to gather and process and many nutrients like a healthy coral. When coral dies the diversity of the sea life drastically reduces. To slow the decline of coral reefs in our oceans environmental protection advocates lobby for tighter restrictions on fishing, wastewater emissions into the ocean, and the trade of endangered and protected species. Millions of dollars are invested in reef restoration projects every year to turn the corner on the demise of our greatest resource. We at Blue Star Coral Farm do our part to help in these efforts and to insure that future generations can enjoy the splendid mysteries that lay under the glistening surface of the water.