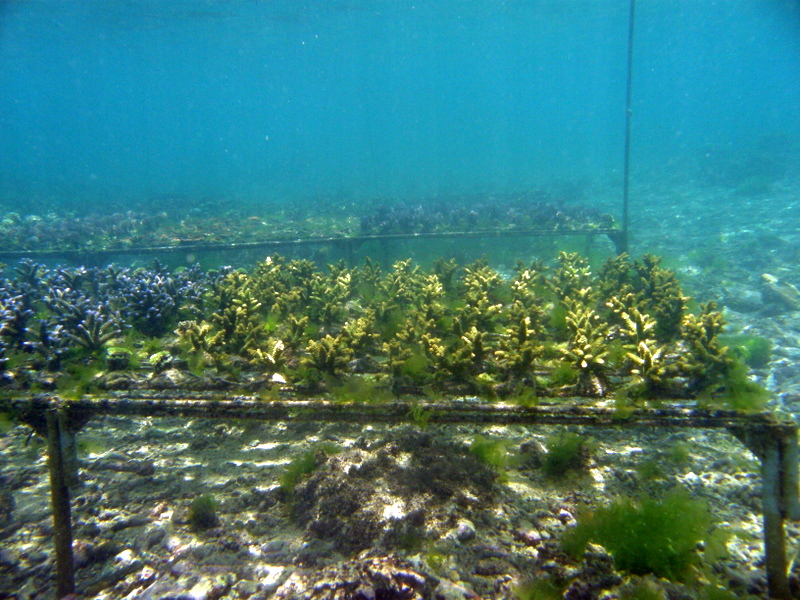 Coral farming is known to environmentalists for a few decades now. It has been used for commercial reasons, as well to aid environmental restoration efforts. Reefs are suffering from global warming. Scientists estimate that about 50% of all reefs worldwide are effected in some level or another. The effect called coral bleaching transformed the colorful vibrant forests of underwater live into barren landscapes. Coral farming seeks to be one of the tools marine scientists use in the efforts to populate damaged reefs. The two different ways to accomplish that are either raising coral in the ocean by using ideal locations where to place the seedings. The other more controlled location is on land in special containers. Both types of farming use the method of micro fracturing in which a full size coral get split in small pieces. That inspires growth at much faster rate as it naturally would occur. One coral creates a large number of clones that are raised to a size that is suited to survive at the destination.

Raising coral in the ocean has a few advantages but also disadvantages. The coral can be grown in the ideal depth near the waters it finds is destination place when we use it in restoration efforts. The coral is mostly adapted and the transfer will not provide a large shock. It increases survival rates because already with the cultivation process, we can select an environment and species that are most adapted for the target environment. They are fortified against disease and threats commonly found in those waters and adapt to the level of nutrients, sun and other prevailing factors. The disadvantage to the ocean farm method is the exposure to natural forces: storms, tides, erosion, pollutants and other detrimental factors.

Land base mariculture as been employed in the raising of fish for human consumption, has proven to be an effective way to raise micro fractured coral as well. The challenge here is to mimic the requirements in water quality and light, food sources and such, in a man mad environment. Coral are a bit finicky and not as easy to keep alive as Tilapia for example. For that reason land based aquaculture of coral has its challenges. However once a system is in place to successful propagate the clone farm, it can be scaled and implemented in a number of locations. The whims of the ocean water are not an influencing factor here and it theoretically could be employed near the arctic circle as well in the tropical region of the corals point of origin. The initial investments are much greater than using what nature provided us with already.

A startup named Coral Vita which is located in the Bahamas employs land based facilities in the effort to grow coral for commercial and environmental use. The companies co founder Sam Teicher told in Press statements: “We plan to sell restoration services to resorts, developers, governments, coastal insurers, and everyone else who depends on these benefits.”

We at the Blue Star coral farm employ ocean base coral farming exclusively. We feel that’s the right way for us to facilitate the growth of the best and healthy coral, that will continue to thrive in the natural environment as well as in the fish tanks where they become ornamental centerpieces in someones private coral reef. We export life coral to wholesale customers worldwide. The island of Bali in Indonesia is located in a prime location to facilitate ocean based coral farming. Mariculture may very well be one of the most important tools to fight the demise of this essential natural resource.